British Columbia has doubled height limits allowed for timber towers – and countries around the world are following suit. 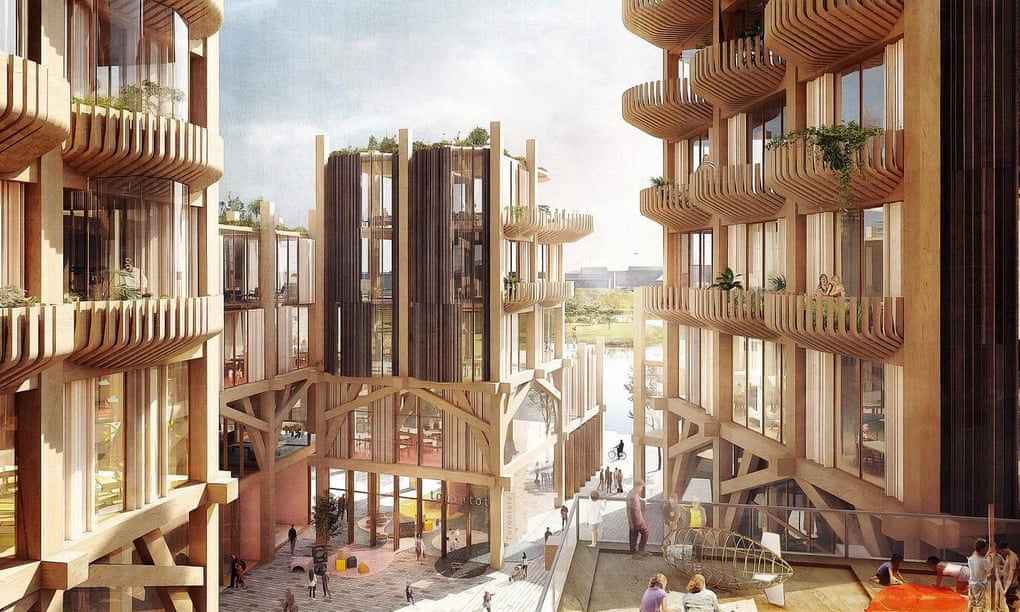 British Columbia is no stranger to wooden giants. Along its western coast, Douglas fir and Sitka spruce trees topping 60 meters in height have in some cases weathered nearly a millennium of storms.

Now a growing chorus of architects, foresters and engineers want the province’s biggest city to grow another cluster of wooden giants: timber skyscrapers.

Already, Vancouver’s 18-storey Brock Commons tower stands as a testament to the vast possibilities of wood. Once the world’s tallest timber building, it was built cheaper, faster and with less environmental impact than a comparable steel and concrete structure would have been – offsetting an estimated 2,432 metric tonnes of carbon.

Now the provincial government has changed its building codes, effectively doubling the height limit for wood-frame buildings to 12 storeys (Brock Commons was granted an exception when it was built). The Canadian government is expected to match BC’s codes nationwide. 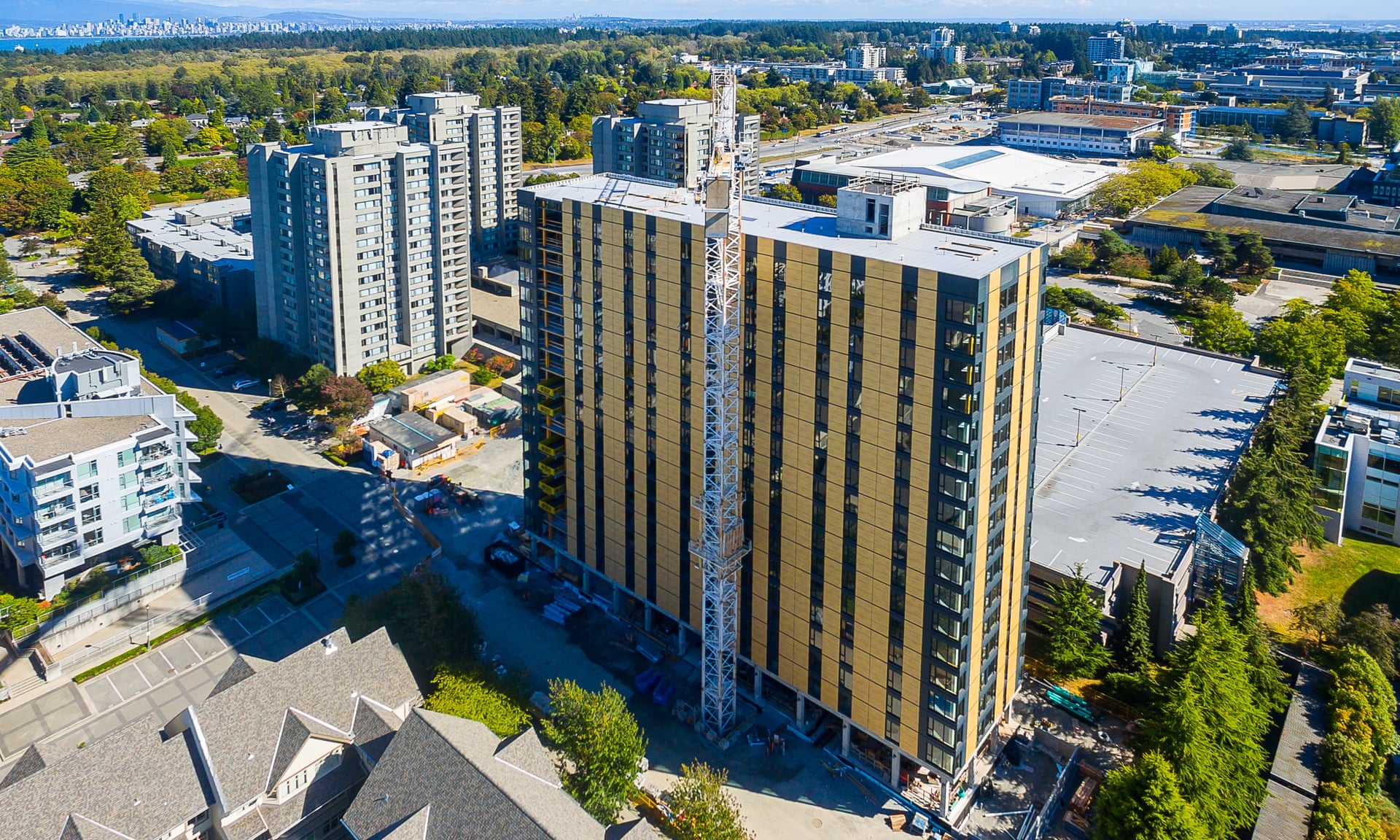 The 18-storey timber Brock Commons tower in Vancouver was built cheaper, faster and with less environmental impact than a comparable steel and concrete structure. Photograph: University of British Columbia

Vancouver is now pushing even those limits by unveiling plans for the Canada Earth Tower, an ambitious 40-storey tower that would be the world’s tallest wooden building. The design includes around 200 homes, with an outdoor garden for every three floors as well as premium office space and retail.

“[British Columbia’s] actions have created a ripple effect around the world,” said Michael Green, a Vancouver-based architect and vocal proponent of timber buildings, pointing to recent relaxations in wood building codes in other countries. “The United States has changed its code effectively because of Canada. China is changing its code effectively because of Canada.”

There’s another reason Canadian officials think the country could take the lead in transforming the way we build: its vast supply of trees. Canada has nearly 350 million hectares of forest, with the bulk of harvesting in British Columbia – where its environmentally conscious design goals have often jarred with the deeply controversial practice of logging old-growth forests. 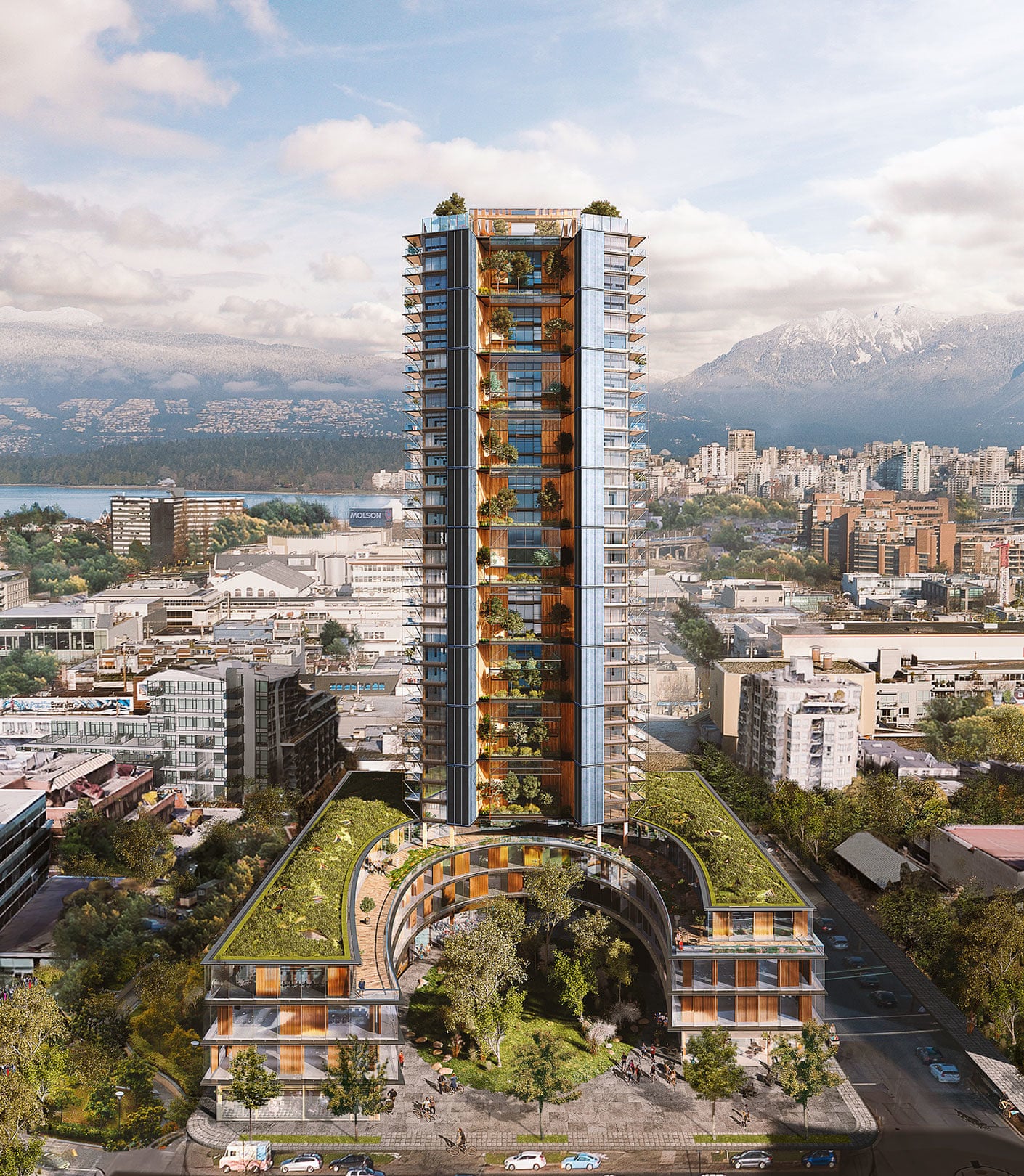 More than half of the 3.2m hectares of old-growth forests in British Columbia are protected lands, but the remaining 1.42m hectares – home to towering western red cedar, fir and spruce – still face the prospect of chainsaw blades. The province has so far resisted calls for a moratorium.

“We have an ecological emergency across vast parts of British Columbia,” said Jens Weiting of the Sierra Club. He points to the clear-cutting of old growth forests as a catalyst for increasing fire risk, removing some of the most effective carbon sinks and depleting a resource that takes generations to return.

But the large slabs of wood that architects propose for the next generation of towers don’t come from old-growth sanctuaries. Instead, the massive beams and columns are created from the aggregate of many smaller pieces, mimicking many coveted characteristics of old-growth wood – including strength – with a fraction of the ecological damage.A lot of that [old-growth] wood is simply converted into relatively small dimensional lumber, which could easily be replaced by other sources,” said John Innes, dean of forestry at the University of British Columbia in Vancouver. “Engineered wood has provided the opportunity to actually back off the harvesting of old growth.”

Both the Ancient Forest Alliance and the Sierra Club of British Columbia told Guardian Cities that, when done in a sustainable manner, the harvesting of younger, second-growth forests represents a way of protecting old growth trees.

Despite popular misconceptions of wood as fire-prone and unstable, it can be a robust and innovative building material. Wooden skyscrapers are made of cross-laminated timber (CLT), in which perpendicular strips of wood are glued together to form sturdy beams. By 2024, Japan’s Sumitomo Group hopes to use CLT to build a 70-storey wood skyscraper in Tokyo, the world’s riskiest city when it comes to earthquakes. 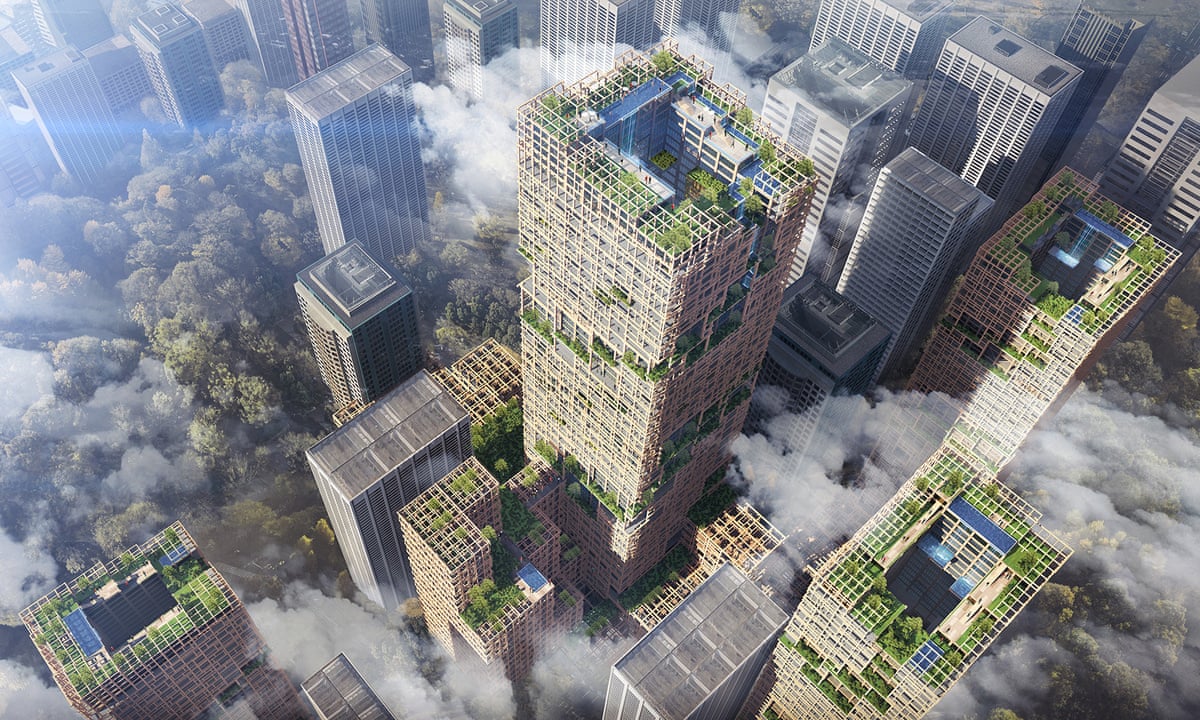 Originally a Swiss invention, CLT has been the norm in Europe for decades. Yet years of conservative building regulations in North America have hampered its uses.

All of that looks poised to change as Canada leapfrogs European nations by relaxing the rules. The government has also funnelled millions of dollars into research with forestry companies and universities, which are rushing to perfect new techniques and uses for wood.

“This is the first new way of building a skyscraper in a century,” said Green, whose firm recently finished Minneapolis’ T3 building, a seven-storey wood structure, and has proposed designs for other wood towers in Toronto. “It challenges so many conventions in the construction industry.” 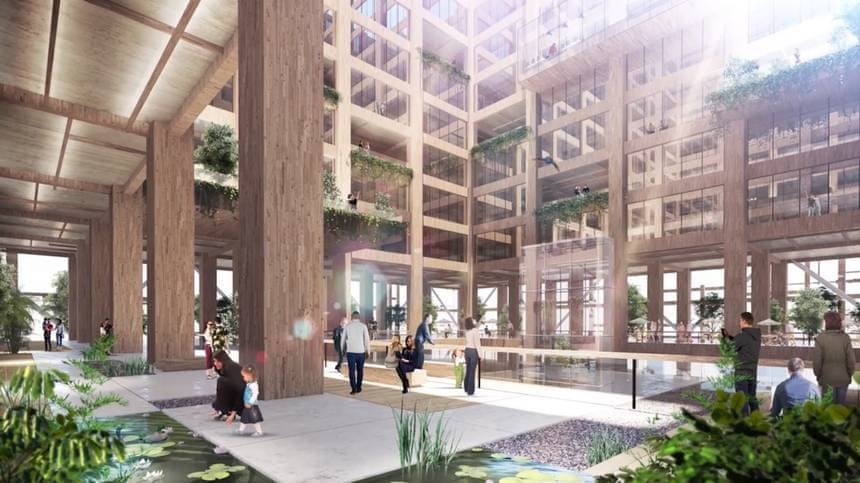 Lighter and more efficient to use than other structural materials, engineered wood carries much less of an environmental footprint than concrete, which produces up to 8% of the world’s emissions.

The resulting buildings, which often employ exposed wood interiors, are meant to elicit a sense of warmth and joy in visitors, said Jonathan King, a Toronto-based architect.

“As a species, we clamber for places where there are natural materials all around us,” he said.

King’s firm broke ground on an eight-storey wood officer tower in June. Meanwhile, on the city’s waterfront, a controversial project led by Sidewalk Labs, a sister company to Google, aims to be “the first-ever mass timber district in the world”, with some of the planned 12 wooden buildings reaching as high as 35 storeys.

Because most of the pieces can be prefabricated, constructing a timber high-rise is like “building with Lego”, said Innes. 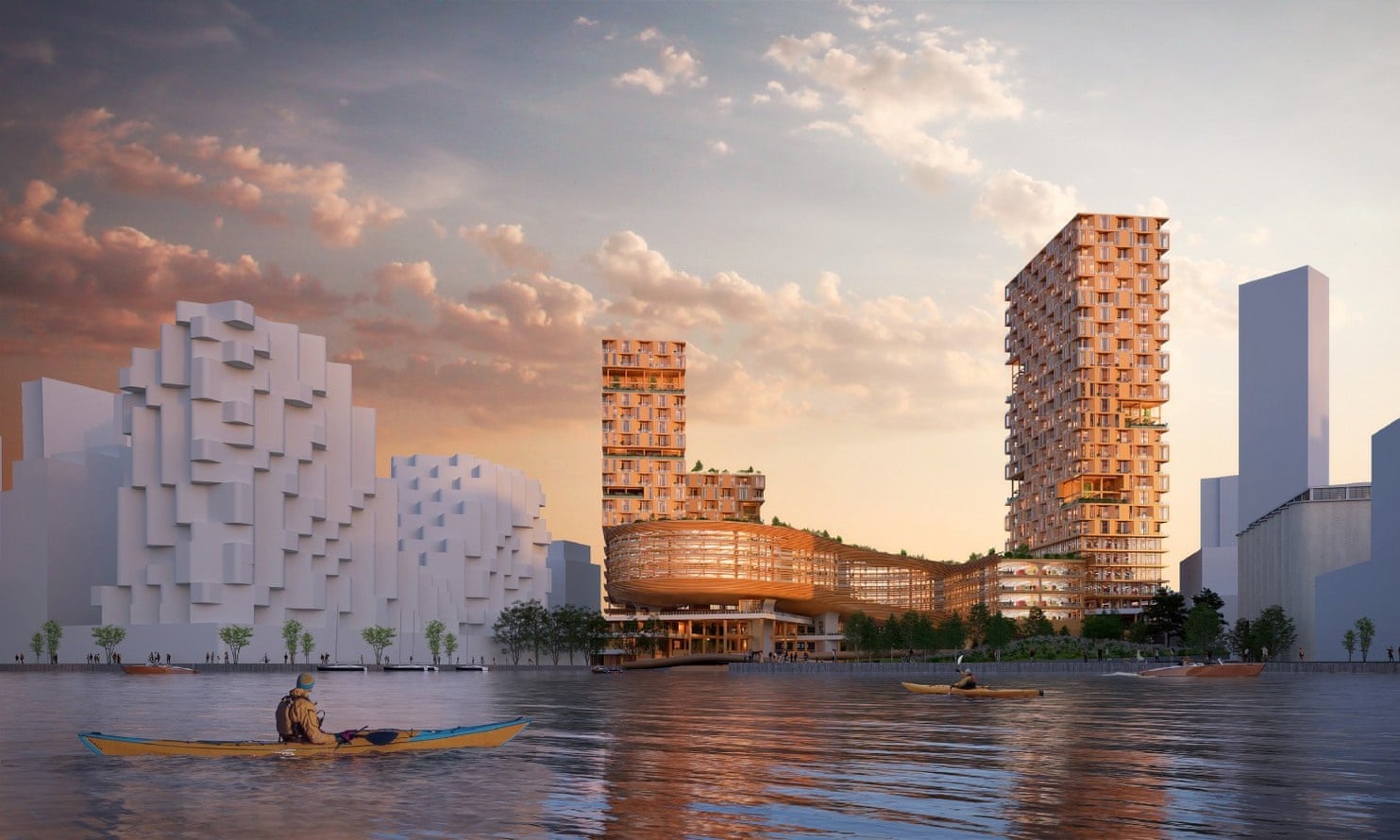 “Tall wood buildings draw attention to the possibilities,” he said. “But when we actually look at what is actually happening— and where we could utilize the greatest amounts of wood— it would be in mid-rise buildings.”

Indeed, the bulk of new commercial timber buildings projects is focused on mid-to-low rise structures, such as commercial warehouses that currently use mainly concrete and steel, with large amounts of waste.

“The truth is, there is no such thing as sustainable building. Everything we do in building includes taking a cost out of something,” said Green. Sustainable management will likely increase costs for forestry companies, builders and taxpayers, but for many in British Columbia, home to giants both past and future, those are costs worth paying.